About the Town of Bedford

In 1781, Bedford County was split to make Campbell County and the village of New London lost the title of county seat. A new location had to be found for this purpose and the village of Liberty was founded in 1782 ("A short history of Bedford Town/County museum"). Liberty remained a village until becoming a town in 1839. As a result of a devastating fire in the late 1880s, the citizens of Liberty undertook a massive revitalization campaign. The town was renamed to "Bedford City" in 1890, and along with the name change came economic prosperity in the form of improved rail service, textile, furniture manufacturing, and electrification of the City. Numerous new buildings and subdivisions were built, and the City created its own electric utility.
Bedford City continued to gain prestige as the agricultural, commercial, industrial and administrative center for the area, and it attracted several college preparatory schools during the late 1890s and early 1900s: Belmont Seminary, Jeter Institute, Randolph Macon Academy, and Virginia Business College. Not only did the opening of the schools bring new students into town, it also made the "Liberty Improvement" (one of the several subdivisions of Victorian-era middle-class homes built during the expansion) a perfect location for the school teachers. These homes can be seen today in the area around Avenel House.

Although the expansion was short-lived, Bedford City continued to be an agricultural and manufacturing center for many years to come, and evolved into a typical American small town. Bedford City was also home to some of the brave soldiers that fought at the D-Day Invasion; known as the "Bedford Boys," these men served with Company A, 116th Infantry, and lost the most soldiers of any town during the invasion. Their sacrifice was immortalized in the 2008 film "The Town They Left Behind."

In 1968, the name was changed again to the City of Bedford, and the town became in independent city under the laws of the Commonwealth of Virginia. Another round of economic expansion and change ensued, and today the Town of Bedford remains in transition, becoming a small cultural mecca, with art, music, and design taking center stage. Artists from all over the Blue Ridge are settling into the crofts and studios of centertown Bedford, and live roots music can be found in the local restaurants several nights a week. The City is still home to several cutting-edge textile, specialty manufacturing, and graphics industries, and is working actively to recruit Information Technology, green power, and light manufacturing jobs.

The Town of Bedford is centrally located between the metropolitan areas of Roanoke and Lynchburg (25 miles from each), and is only 178 miles from Washington D.C. The population is 6,299 (per the 2000 census) and the town spans an area of 6.81 square miles. For more statistics on the Town of Bedford, please visit the city data website.
Resting at the foot of the Peaks of Otter in the heart of Virginia's Blue Ridge Mountains, and only 9 miles from the Parkway, the Town of Bedford is surrounded by some of the most beautiful scenery in Central Virginia, and has a moderate climate. The town is home to several historic landmarks, including the National D-Day Memorial, the Elks National Home, and the Avenel Plantation. Nearby, visitors have a wide range of attractions: Thomas Jefferson's Poplar Forest, Smith Mountain Lake, the Blue Ridge Parkway and the Peaks of Otter, and the Sedalia Center for the Arts. There are a dozen wineries within a short drive out of the town, and plenty of antiques, horseback riding, hunting, fishing, and other outdoor sports, making the Town of Bedford the perfect "home base" for a visit to the area. Please visit our "Links" section for more information on places to visit in our area.

The town operates under a Town Manager with the Town Council as the governing body. Under this form of government, the elected governing body is responsible for establishing policy, passing ordinances, voting appropriations, and developing an overall vision for the town. The Council appoints a Town Manager to oversee the daily operations of the town government and implement the policies they establish.

The Town Council is composed of elected members from whom a mayor and vice-mayor are selected. There are seven members of the Town Council, each elected for a four-year term. For more information regarding the Town Manager and Town Council, please visit our Administration page. 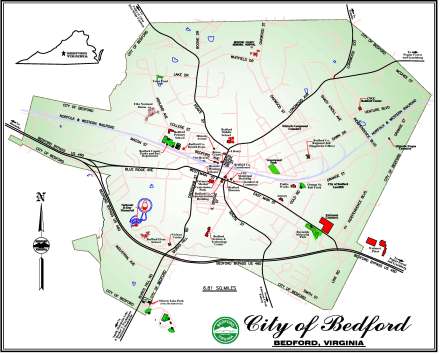